This is the latest installment of Public Streets, an urban observation series created by Ellis Avery and curated by Abigail Struhl.

I’m standing on a foot-wide cement island in the middle of the bustling Avenida Central, one of the major arteries in Panama City’s Calidonia neighborhood. For a moment I close my eyes, just to take in the overwhelming richness of sound: traffic, horns, eruptions of music (salsa, reggaetón, típico), voices of disc jockeys and commercials, laughter and chatter of pedestrians, and vendors yelling out the price of their treats. All this happens on either side of me, making me feel temporarily trapped by the street. I soon realize I’m causing a stir because of my stillness here, and because for the past 10 minutes I’ve been photographing what seems to be an unremarkable hotel and casino—and yet is an object of my immense fascination.

What passersby don’t see is the ghost of a long-since demolished building, Casa Müeller, a three-story structure erected in 1910. Casa Müeller was one of many colorful timber-sided “board buildings” that began to appear in Panama City in the late 19th century, when tens of thousands of men and women crossed the Caribbean to work as laborers on the new American-managed Panama Railroad and Canal project. As the largest of these tenement-style buildings in the city—it provided 76 “tenement rooms” for workers and their families, after having served as a police station, a fire house, and a women’s penitentiary—Casa Müller became known as an important social hub and a cultural nexus for Afro-Caribbean families, therefore gaining its city-wide fame. Over the course of my research it has become a site of fascination for me: a portal, or perhaps a keyhole, through which I can catch a glimpse of what life was like for this new Caribbean community. But finding it was a difficult task.

Casa Müeller was demolished in 1972, as part of the local government’s growing ambition to “modernize” the city and transform it into a lucrative commercial district. As a consequence, the building’s tenants, most of whom were Afro-Caribbean descendants, were pushed out to other neighborhoods, other cities, and abroad. Many local residents felt that this famous building ought to be registered as historic patrimony and turned into a museum commemorating Afro-Caribbean cultural and political history. But its location, so near to the old colonial district, suggested potential for expanded tourism, and the sale price for the building was too high. Casa Müeller came down. And like the building’s tenants, artifacts that commemorate this remarkable structure and its history have dispersed. 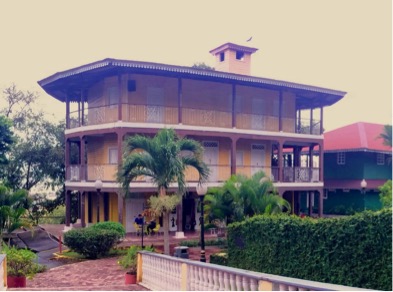 I first saw a version of Casa Müeller at Mi Pueblito, an “ethnographic village” on the outskirts of Panama City that displays Panama’s different vernacular or folk-architectural styles in the form of life-size building models. The famed Casa Müeller was replicated at Mi Pueblito, most likely because of its three stories and unique triangular shape. While it is a grand reproduction, it does not provide information on the house’s original location or its use-history. Instead, tourists visit to snap photos of the sunshine color and the large wraparound porches.

It was not until I encountered the building again that I learned more about it. I found it, this time by surprise, in the Museo Afroantillano de Panamá, a small Afro-Caribbean museum in the Calidonia neighborhood. Originally a church built by Barbadian immigrants in the early 20th century, the museum remains one of the last wooden buildings left in this part of city. Inside the museum, old artifacts and photographs help move time back to the early 1900s, when this new Caribbean community was forming and fighting to be recognized as Panamanian. One photograph caught my eye right away. It was Casa Müeller, “one of the most iconic landmarks of Calidonia,” occupying a large triangular intersection of three bustling streets. The image revealed the Avenida Central, bustling even in its early days, when horse-drawn carriages plowed through the neighborhood. 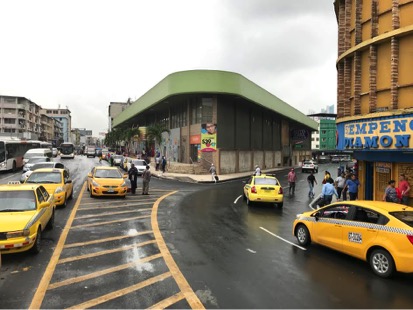 Leaving the museum, I made it my mission to go find the triangular block where Casa Müeller used to stand. Finding this building would be no easy task, since the neighborhood of Calidonia is perpetually in motion. The streets still move in winding rotations around this pulsing heart of the city. Legend has it that in the early part of the 20th century the building was so famous that one could simply ask for it by name and be pointed in the right direction. Following the legend, I asked vendors, pedestrians and police officers where to find “Casa Müeller, el edificio triángulo aquí en Calidonia.” They all seemed to recognize the name, their eyes glazing over as they attempted to remember the significance of this building and its exact location. “Ah sí, sí, por allá!”

After an hour spent following every different direction, I wound up a single block behind where I’d first started, on the Avenida Central, at an intersection I realized I’d passed countless times before on my tours throughout the city. I noticed the place from a distance, the splitting of the Avenida Central into Calle 24 Este and Avenida Perú, and exclaimed with enthusiasm at my discovery of a building (now the Hotel Casa Miller) that today is so unremarkable—and is passed unnoticed by thousands of travelers every day.